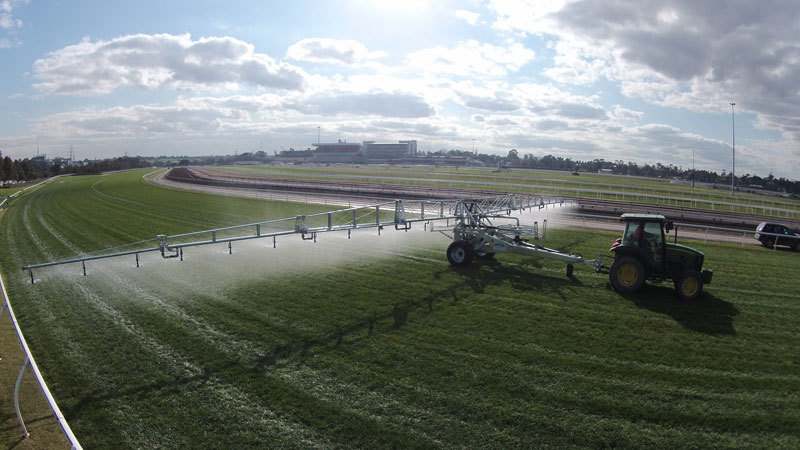 Flemington goes with the flow from its two new irrigators

Flemington racecourse has just taken delivery of two new Upton Irriturf Racecourse irrigators to be used in preparing the grass track surface for the Spring Racing Carnival and the Emirates Melbourne Cup.

The new irrigator upgrades a machine design released 20 years ago – and still used at a number of local racecourses – and exported to tracks in the USA, UK, South Africa and New Zealand.

The new Upton machines at Flemington have a 30-metre wide folding galvanized steel boom and a 200-metre length of retractable hose and can water a 400-metre section of the track quickly and accurately, employing numerous control and operator features.

Caulfield also has a new irrigator from Upton Engineering, a company based in Corowa, just across the Murray in NSW, and is using it this spring.

The Flemington machines cover the full track width. They have four individual folding galvanized steel boom sections, which can be folded and switched off so that the boom width can be varied to avoid any obstructions or to change the spread of watering. The boom can also be raised or lowered to suit particular circumstances or to avoid distortion caused by the wind.

The flexible hose is 95mm (or three inches) in diameter and is carried on a hydraulically activated wind-up reel. The hose snaps-on to a hydrant inside the running rail at every 200 metres so that the irriturf can water a total track run of 400 metres a time.

The water, at a typical flow rate of 15 litres a second is applied via a choice of sprinklers fitted along each section of the boom, allowing the 400-metre section of the track to receive the equivalent of 9mm of rainfall in two hours.